Home » Blog » The Many Benefits of Medicinal Mushrooms 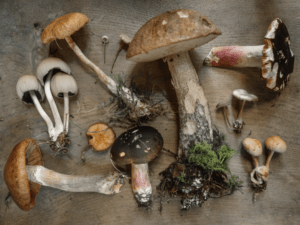 The use of mushrooms in medicine stems from ancient times. They have been used for centuries in Chinese medicine and were considered to be beneficial in promoting longevity and even immortality! Whilst we acknowledge that mushrooms do have some limitations in these areas, the many therapeutic benefits of mushrooms have become increasingly recognised in Western medicine especially in regards to their immune-modulating and anti-cancer properties.

There are countless types of mushrooms used medicinally and the benefits they provide depend on the type:

Shiitake mushroom has been used to alleviate the common cold for centuries. It has been used as an adjuvant in tumour therapy, specifically radiotherapy and chemotherapy, due to its ability to decrease tumour cell proliferation (Kim et al. 2007). It has also been reported that Shiitake enhances host resistance against infections by bacteria, fungi, parasites and virus and promotes non-specific inflammatory and immune responses. Furthermore, it helps to lower blood cholesterol levels and reduce high blood pressure.

One of the most well-known of the medicinal mushrooms is Reishi which has been used since ancient China. It contains a variety of compounds, including polysaccharides and triterpenoids, which offer its various therapeutic benefits. It is an antioxidant and an anti-inflammatory and helps to regulate the immune system by stimulating immune cells. It also assists in regulating healthy blood pressure and maintain healthy cholesterol levels, showing great benefit to the cardiovascular system. Evidence suggests that it is also beneficial in the management of allergies, helps the body cope with stress and has even anti-cancer activity (Guggenheim, Wright & Zwickey, 2014).

Lion’s Mane is coming to the forefront of scientific research for its ability to act on the central and peripheral nervous system. It has the ability to stimulate nerve growth factor (NGF), a group of proteins that not only ensures the maintenance of healthy nerves but also the regeneration of old ones. Lion’s Mane shows potential in treating a host of neurological disease states. For example, it has demonstrated the ability to restore memory, enhance learning and alleviate behavioural changes in rodents with induced Alzheimer’s disease (Zhang et al., 2016). In other studies, supplementation has led to improved memory scores in adults with age-related cognitive decline (Mori, Inatomi, Ouchi, Azumi, & Tuchida, 2009).

Lion’s Mane has exhibited benefits as a potential adjunct treatment in other neurodegenerative diseases such as Multiple Sclerosis (MS) and Motor Neuron Disease. Furthermore, due to its polysaccharide compounds, Lion’s Mane has immune-stimulating and anti-inflammatory properties and possesses significant antioxidant activity.

Traditionally used in rehabilitation and to support recovery from illness, Cordyceps has also shown the ability to improve oxygen uptake and energy levels, making it a great supplement for the elderly (Xiao, Huang et al. 2004). It improves athletic performance and improves the body’s ability to cope with stress. It is also used as a lung and cough tonic. Cordyceps also demonstrates a variety of other health benefits- it reduces inflammation, provides antioxidant protection and helps to modulate the immune system.

Chaga mushrooms are most well-known for their antioxidant activity as well as immune-modulating activity. They can attribute most of their free radical scavenging ability to the polyphenolic and triterpenoid compounds it contains and its immune-modulating activity to the β- glucan polysaccharides. It also assists in balancing blood sugar levels, improves sleep and acts as both an anti-viral and anti-fungal.